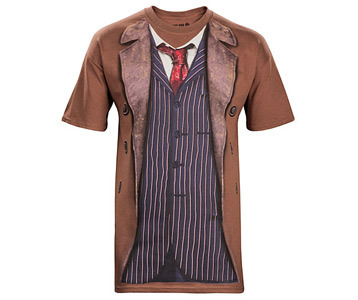 After Doctor Who's revival in 2005, David Tennant took over for Christopher Eccleston whose tenure only lasted one series. This Doctor Who David Tennant costume shirt allows you to suit up as the 10th Doctor. You might even find yourself spouting technobabble at times, especially when it comes to describing non-linear temporal physics. Wear this 10th Doctor costume t-shirt and pair it with a Sonic Screwdriver for a simple but effective Doctor Who costume. Celebrate the character whose companions include Donna Noble, Rose Tyler and Martha Jones.

This t-shirt was discovered at StylinOnline.