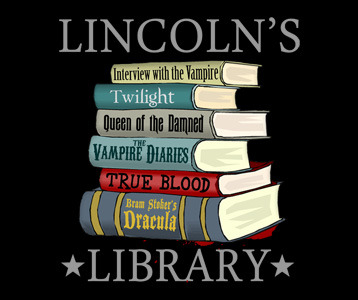 If you like your history with a twist of the macabre, then you’re probably already a fan of author Seth Grahame-Smith’s 2010 mashup novel Abraham Lincoln, Vampire Hunter.  This shirt is a tribute to the 16th President of the United States and his secret vampire hunting past.  The book was written as a biography of Abraham Lincoln based on secret diaries that the author obtains from a real vampire named Henry Sturges.

The movie adaptation of Seth Grahame-Smith’s book is set to be released in 2012 in 3D.  Produced by Tim Burton, it stars Benjamin Walker as Lincoln in his somewhat younger years.  Actress Mary Elizabeth Winstead portrays Mary Todd, Lincoln’s wife, and Rufus Sewell (Dark City) plays the lead vampire.  If you love the story and can’t wait to sink your teeth into the movie, this Abraham Lincoln Vampire Hunter t-shirt will satisfy your thirst in the meantime.