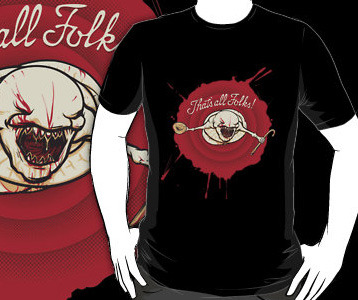 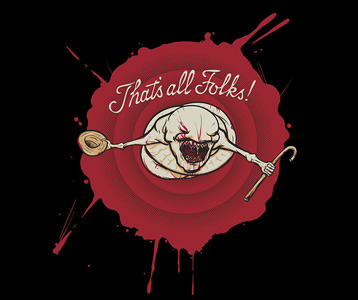 Whether you’re a fan of the alien chest burst scene from Ridley Scott’s 1979 sci-fi masterpiece, or you enjoy the baby alien stomach burst scene from Spaceballs even more, this Alien Stomach Burst t-shirt is an ingenious tribute to both movies.  The design features a baby alien holding a top hat and a cane bursting through the stomach of the wearer, just like in Spaceballs the movie.  Only here, he is coming through a bloody Looney Toons logo, letting everybody know, “That’s all Folks!”  If a chestburster just came out of your chest, that would probably be all for you too.  Actor John Hurt appeared in the respective scene in both movies and can be heard making the comment, “Oh, no.  Not again” in the 1987 comedy Spaceballs.  Reenact the scene wearing this Alien Chestburster t-shirt that will undoubtedly garner a few laughs and a cringe or two.