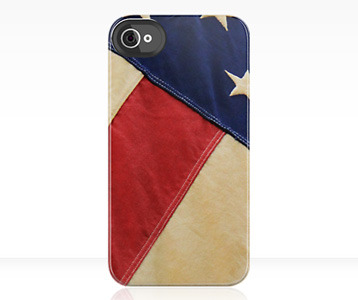 Red, white and blue.  This American Flag iPhone case is for those U.S. citizens whose patriotism extends beyond a slice of hot apple pie and some rip-roaring 4th of July fireworks.   The current fifty star and thirteen stripe design was adopted in 1960, replacing Betsy Ross’s original 13 star flag crafted in 1776 and made official in 1777.  As you should know, the thirteen stripes represent the original colonies and the fifty stars are the current states.  Snag this patriotic United States iPhone cover if you are proud to be an American and aren’t afraid to show it.  Stars and stripes forever!

This American Flag t-shirt was discovered at RedBubble.