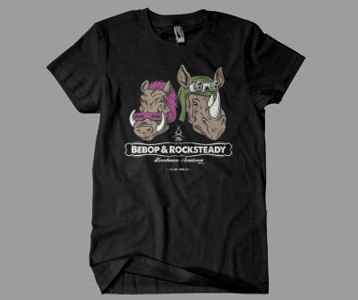 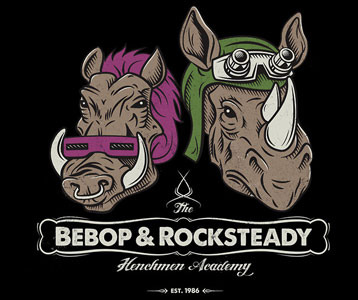 If you were a member of an evil gang whose primary foe was the Teenage Mutant Ninja Turtles, would you volunteer to be mutated from your human form into a super strong beast in order to better fight the Ninja Turtles?  That was the decision that Rocksteady, once a stocky blond Caucasian man, and Bebop, a formerly tall African American man with a purple mohawk, faced when presented with the option by their leader, the villain Shredder.  This Bebop and Rocksteady shirt features the pair on the front and displays their familiar names underneath them.  Bebop is now a human warthog and Rocksteady has become a rhinoceros.  Their names were derived from specific genres of music; rocksteady is a style of Jamaican music that was a predecessor of reggae and bebop is a type of Jazz.  The pair has appeared in the 1980s Teenage Mutant Ninja Turtles cartoon, in addition to the Archie TMNT Adventures comics, Ninja Turtles video games and of course as popular action figures.