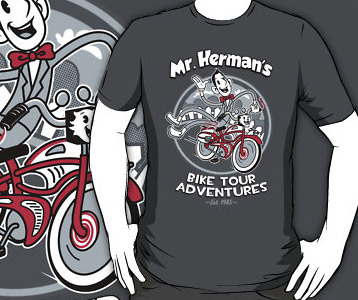 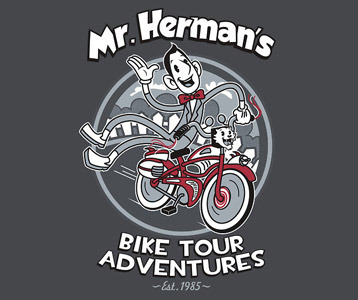 Directed by Tim Burton, who was behind the camera for his first full-length feature film, Pee-wee’s Big Adventure is based on the popular 1980s TV show The Pee-wee Herman Show.  The movie features Paul Reubens reprising his role from the series that made the character famous.  This Pee-wee Herman t-shirt displays a creative ad for Mr. Herman’s Bike Tour Adventures, playing on the character’s love for his classic red and white bike with whitewall tires.  In the movie, Pee-wee’s bike is stolen and after consulting a psychic, he embarks on a big adventure to recover his most beloved possession.   Since its release, the film has gained a cult following, in part due to increased appreciation after the success of Tim Burton’s future projects.  If you wish that you could join Pee-wee for a bike ride, this Mr. Herman’s Bike Tour Adventures shirt will get your pedals moving.