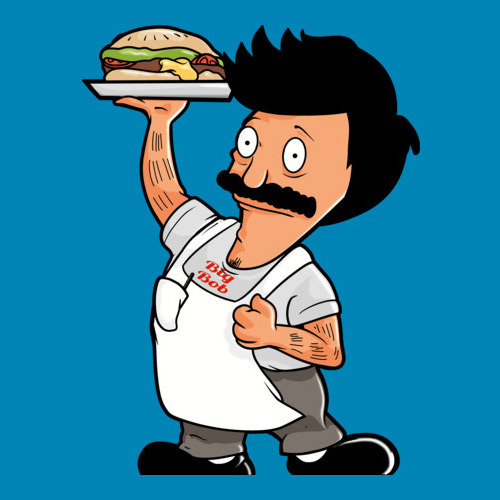 This Bob's Burgers Big Boy t-shirt will remind many people of not just the hilarious cartoon, but also of a less complicated, more relaxed time in history. You probably remember them for the Big Boy double-decker cheeseburger, but you might not be familiar with their history. No need to take notes. There won't be a test. Just sit back and imagine the aroma of one of Bob's burgers wafting over you.

Big Boy Restaurants began as one small restaurant in Glendale, California called Bob's Pantry. In 1936, Bob Wian opened the restaurant with the money he got from selling his car. He soon became known for the double-checker cheeseburger after some orchestra members dropped in and asked for an out of the ordinary burger. He quickly whipped up a double meat concoction separated by a triple slice bun and topped with homemade relish. According to Bob himself, the burger was named after a child. "He was about six and rolls of fat protruded where his shirt and pants were designed to meet. I was so amused by the youngster – jolly, healthy looking and obviously a lover of good things to eat, I called him Big Boy." The name stuck and the rest is history. In 1967, he sold the chain and it has been changing hands ever since. Currently, there are hundreds of these franchises in existence.

This Bob's Burgers tee features a parody of the legendary Bob's Big Boy mascot, the young fella who has become synonymous with both the restaurant chain and classic good food. Snatch up this Bob's Burgers Big Boy shirt and get your family reminiscing about the good ol' days over some really good burgers.