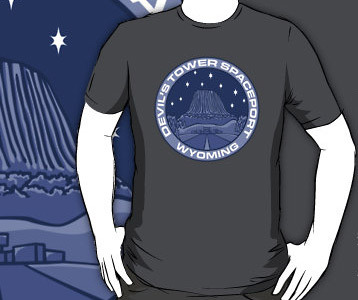 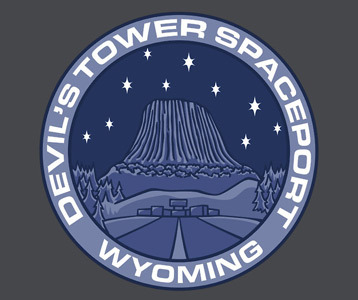 Steven Spielberg’s science fiction film Close Encounters of the Third Kind tells the story of Roy Neary (Richard Dreyfuss), an electrical lineman working in Indiana who has a close encounter when an alien spaceship flies over his car.  The lights from the ship are so bright they burn the side of his face.  Like others who have reported sightings, he begins to have visions of a mountain-like formation.  This Close Encounters of the Third Kind t-shirt displays an image of Devil’s Tower Spaceport, which is where the alien ship lands in the movie after the extra-terrestrials transmit its geographical coordinates.

Devil’s Tower is a real igneous rock intrusion, or laccolith, located in Wyoming.  Each summer hundreds of climbers ascend the formation, which rises 1,267 feet above the surrounding terrain.  This Devil’s Tower Spaceport shirt celebrates the location where Roy Neary meets the aliens and decides to join them on their travels.  In later interviews after he had a family of his own, director Steven Spielberg admitted to having second thoughts about his decision to have Roy abandon his family and leave with the aliens.  What would you do?  This Close Encounters of the Third Kind shirt will help you to identify the landing area.