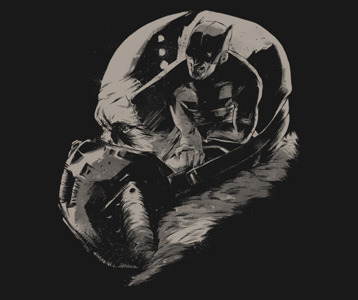 2012’s The Dark Knight Rises not only ushers in the final chapter in Christopher Nolan’s Dark Knight Trilogy, it also introduces the Bane Batman character to the Dark Knight movie franchise (he previously appeared in the 1997 movie Batman & Robin).  Bane is a super-villain who spends much of his life in a South American island prison up until his escape.  While in prison, Bane’s body is used for medical experiments with a derivative of the drug Venom, which ends up giving him superhuman strength.  However, as a result he is now addicted to the drug.  This Dark Knight Bane shirt displays the face of the masked character as he appears in the 2012 movie, where he is portrayed by actor Tom Hardy. In The Dark Knight Rises, Bane turns up in Gotham City where he wrecks havoc and stretches the police force to their limits.  Batman has been in hiding for the previous eight years, since taking the fall for Harvey Dent’s actions.  Unable to watch Bane and his cohorts destroy Gotham, Batman emerges to face his ultimate foe.  This t-shirt displays the powerful villain with the Dark Knight symbol above him.