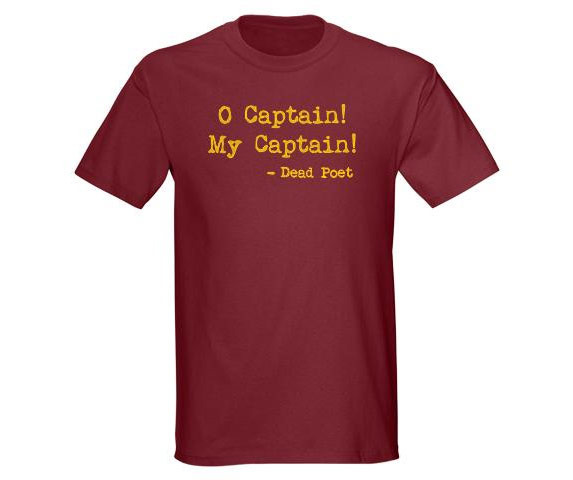 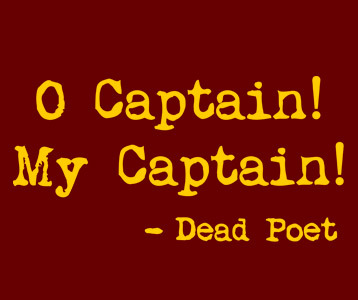 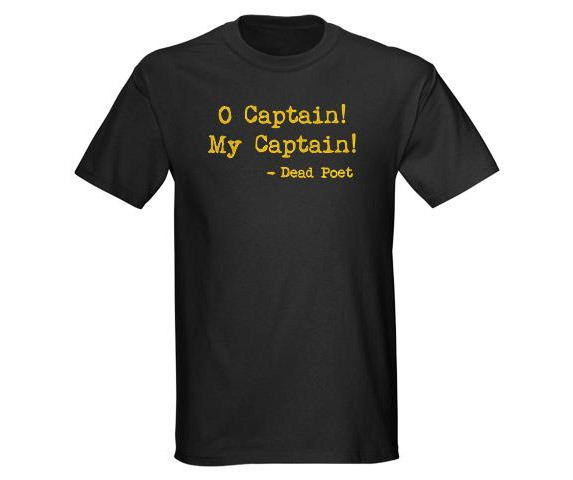 During the summer of 2011 while traveling through Delaware, we decided to seize the day and visit the preparatory school where the Dead Poets Society movie was filmed.  Our visit inspired me to post this O Captain My Captain Dead Poets Society t-shirt that celebrates Mr. Keating’s (Robin Williams) quote from the movie.  The quote is of course from the widely known Walt Whitman poem “O Captain! My Captain!” which tells the story of a sailor whose ship is returning to port to great celebration, only the vessel’s Captain is lying on the deck “cold and dead”.  The poem was inspired by the assassination of Abraham Lincoln.  Metaphorically, the “ship” in Whitman’s poem refers to the United States of America and the “fearful trip” is the Civil War.

Released in 1989 and shot at St. Andrew’s School in Delaware, the movie’s story fictionally takes place in 1959 at the Welton Academy for Boys, a prep school supposedly located in Vermont.  The story surrounds a group of boys, including Todd Anderson (Ethan Hawke), Neil Perry (Robert Sean Leonard) and Knox Overstreet (Josh Charles), who revive a secret club known as the Dead Poets Society after they discover that their refreshingly unorthodox teacher, Mr. John Keating, had founded the club years earlier.   The club and Mr. Keating help to instill confidence in the boys, inspiring them to want to live their lives to the fullest and giving them the courage to follow their dreams.  Things go awry after Neil’s father discovers that his son has betrayed him by taking a part in the school play without telling him.  His father’s strict reaction deflates Neil’s hope that he could do whatever he wants with his life, including following his passion, the theater.

This O Captain My Captain shirt is a tribute to the movie’s ending and its most inspiring moment.  It’s the ideal shirt for anyone who has ever dared to dream, felt inspired to explore their passion, or refused to adhere to rigid conformity, especially when it suppresses one’s ability to grow, both intellectually and as an individual.  Wear this Dead Poets Society shirt the next time you find yourself wanting to stand up on your desk to repeat the quote, “O Captain!  My Captain!”