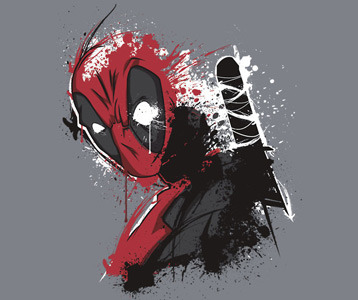 Created by comic book artist Rob Liefeld and writer Fabian Nicieza, Deadpool is known as the "Merc with a Mouth".  This Deadpool t-shirt features an image of the talkative mercenary/anti-hero, who despite being a cocky smart-ass, is quite humorous at the same time.  Deadpool often "breaks the fourth wall", a phrase that refers to when a character or actor talks or acknowledges the audience directly, thus breaking the imaginary wall that exists between the audience and the story's fictional world.  Wear this Deadpool Ink Style shirt as you read the comics or play the Deadpool video game.