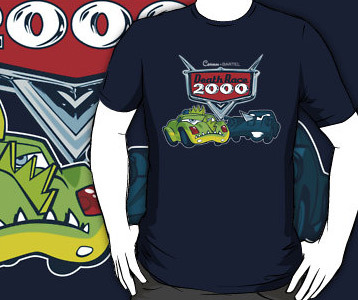 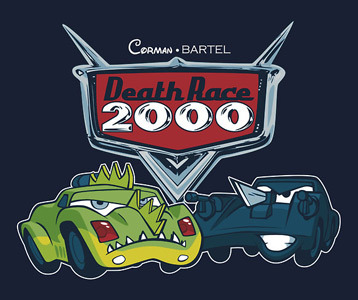 The first time that I saw Roger Corman’s Death Race 2000 was as a kid in the 1980s.  Even though I watched a lot of R-rated action movies at the time (my mom always told me to close my eyes during the objectionable scenes), the offbeat and twisted plot of Death Race left a unique impression on me.  The 1975 film tells the story of a violent cross-country car race of the future where the racers run down pedestrians for points.  David Carradine stars as Frankenstein, the most celebrated racer on the circuit.  A fun interpretation of his monster car is displayed on the left on the front of this Death Race shirt.  Sylvester Stallone plays Machine Gun Joe Viterbo, whose re-imagined car is displayed on the right in the design on this Death Race 2000 t-shirt.  Whether you are a fan of the original or the 2008 remake starring Jason Statham, this tee is the perfect choice since it is nearly as twisted as the movie itself, but in a humorous way.