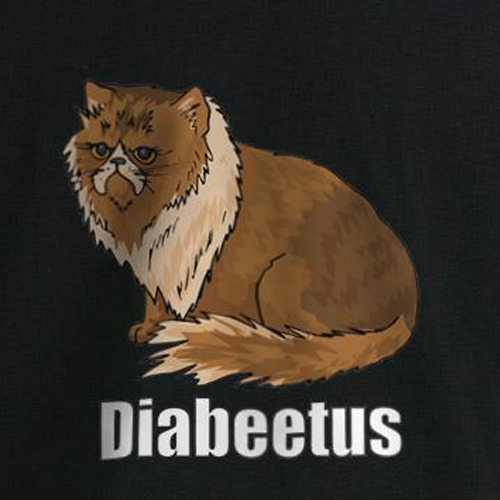 During the summer of 2004 I was diagnosed with Type 1 diabetes.  As I became more aware of the seriousness of the disease, I also became more aware of the many commercials that addressed it.  I watched Patti Labelle dance a two step and B.B. King strum his guitar, both wearing big smiles on their faces.  I remember thinking, “Do we have the same disease?"  Because I wasn't nearly as excited about it as they were.

Then came the reason for this Wilford Brimley Diabeetus t-shirt; I saw his commercials for Liberty Medical in which he referred to his illness as diabeetus.  I almost thought that he had a new version of the illness, until I realized that old Wilford was giving us his interpretation of the word that the rest of the world pronounced as diabetes (dahy-uh-bee-teez).  After all, he is an actor and he delivers his own unique terminology exceptionally well.  Either that or the syllables are getting jumbled in his mustache on the way out.

After a little research into this Wilford Brimley t-shirt, I believe I know how he came up with his version of the name.  Diabetes is also known as diabetes mellitus, a name that was more commonly used in the past and it was more likely still being used around the time when Wilford was diagnosed in 1979.  Combining “diabetes” and “mellitus” could yield Wilford Brimley’s diabeetus.  The disease can also be pronounced dahy-uh-bee-tis, which is more in line with Wilford’s interpretation.

If you have diabetes like Wilford Brimley and me, or you just think that this diabeetus t-shirt is hilarious, then get your hands on one today.  Parodies of Wilford have appeared on Family Guy and in other online videos.  Show your support for the man who starred in Our House and Cocoon.  You’ll be dancing a two step of joy and strumming your guitar in no time.  For a closer look at my own struggle with the disease, visit my blog Me vs Diabetes.