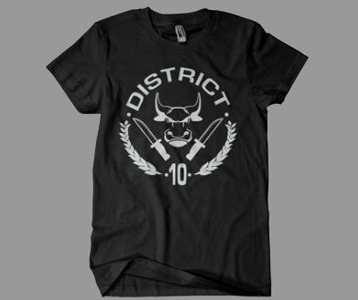 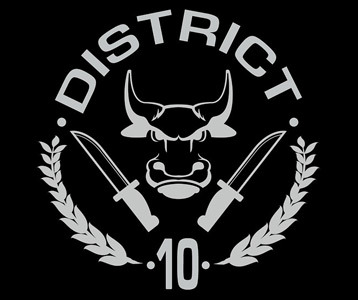 If you’re in the mood for a tasty steak or a juicy hamburger as a member of the Capitol, the meat for your main course will most likely have come from District 10, whose industry is livestock.  It’s not surprising then that their logo features a bull’s face and a pair of butchering knives, as seen on this Hunger Games District 10 t-shirt.  When Katniss arrives in District 13, she meets a refugee named Dalton who had walked there from District 10.  He used to be a cattle farmer and it had been his job to implant frozen cow embryos in order to make the herd more diverse and well-rounded.  Dalton warns Katniss that the inhabitants of 13 are being nice to her because they want to use her for breeding purposes, since a pox epidemic had wiped out much of 13’s native population and made the survivors infertile.

District 10 is also known for the costumes worn by the two tributes at the 75th Hunger Games.  In an attempt to mimic the synthetic flame from Katniss’ costume, the tributes arrived dressed as cows with flaming belts.  Most people, including Katniss, viewed their costumes as ridiculous, despite their attempt to represent their region’s livestock industry.  If you’re looking for a much better way to represent the beef producing region, this District 10 shirt displays a far more effective design.