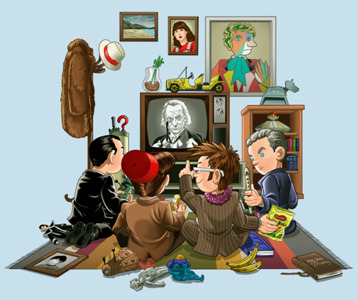 This Doctor Who 50 t-shirt celebrates the anniversary of the sci-fi phenomenon that began on November 23, 1963. This design features many of the Time Lords who have portrayed various incarnations of The Doctor for the past 50 years. Only here, the modern Time Lords are a bit younger and are sitting around the TV watching an "ancestor". On November 23, 2013, the Doctor Who 50th anniversary show aired worldwide to a countless number of eagerly awaiting Whovians. This t-shirt celebrates this momentous occasion and sets the stage for the next 50 years of traveling through space and time with the good Doctor.