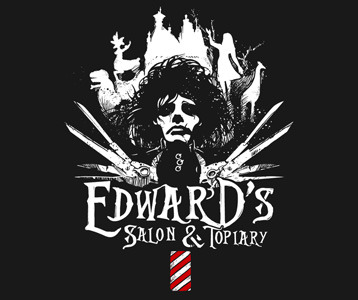 This creative design promotes Edward's Salon & Topiary and is based on scenes from Tim Burton’s fantasy film Edward Scissorhands.  The movie introduced viewers to Edward, an artificial man with scissors for hands who was created by The Inventor (Vincent Price in his final role).   The Inventor had a heart attack when Edward was a boy and passed away before he could complete a real pair of hands for his creation.  After being secluded in an old Gothic mansion by himself for years, Edward is taken home by a local Avon saleswoman named Pegg Boggs (Dianne West), where he quickly falls in love with her daughter Kim (Winona Ryder).  If you wish that you could trim the hedges, carve ice sculptures and cut hair with your bare hands too, then this Edward Scissorhands shirt will help to express those desires.  Of course, you could also buy it because you enjoy the Tim Burton movie and its highly original character.