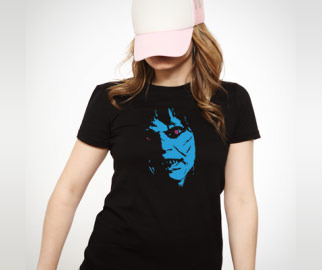 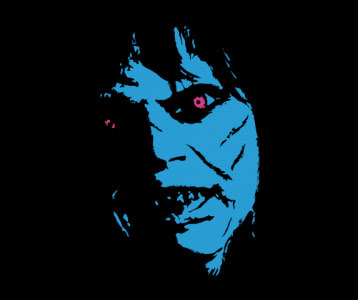 With Halloween right around the corner, classic horror movies like William Friedkin’s The Exorcist seem to be possessing our televisions on a nightly basis.  By Halloween night, nearly every channel will be taken over by ghosts, masked killers and evil spirits.  The 1973 movie The Exorcist deals with the latter, telling the tale of a girl named Regan MacNeil (Linda Blair), who is possessed by a demon that identifies itself as the Devil.  If you love horror movies or are just feeling possessed by the Halloween spirit, The Exorcist t-shirt shown here is an ideal choice for both casual and hardcore horror fans.

The Exorcist movie begins with two priests; the first, Father Lankester Merrin (Max von Sydow), is at the site of an archaeological dig in Al-hadar, Iraq and the other, Father Damien Karras (Jason Miller), is at Georgetown University in Washington, D.C.  As Father Karras tries to deal with his mother’s terminal illness, he begins to doubt his faith.

At the same time, actress Chris MacNeil (Ellen Burstyn), who is on location filming in Georgetown, begins to notice that her daughter Regan, shown on the front of this Exorcist tee, is exhibiting strange and dramatic changes in behavior.  These changes include seizures, levitation, great strength and cursing in a demonic male voice.  While Chris at first attributes these changes to puberty, the doctors believe that they are from a lesion in her daughter’s brain; however, the X-rays show nothing out of the ordinary.  As the paranormal occurrences continue, all medical possibilities are exhausted.  Following the recommendation of a doctor, Chris consults Father Karras due to the fact that he is both a priest and a psychiatrist.  Eventually, Karras requests permission from the church to conduct an exorcism and Father Merrin is summoned to Washington to help.  The two priests attempt to free Regan of the demon that is possessing her, which has caused her to look as she does on the front of The Exorcist shirt displayed here.

In the years following its release, The Exorcist movie briefly became the highest grossing movie of all time and it continues to hold the record for highest grossing horror movie of all time (adjusted for inflation).  Its success on video, DVD and television led to a Director’s Cut rerelease in 2000 that grossed an additional $112 million worldwide.  If you love Regan’s spinning head, vomit spewing, and spider walk down the stairs, then this Regan Exorcist t-shirt is the perfect way to express your own demonic side.

This t-shirt was discovered at Shirtcity.