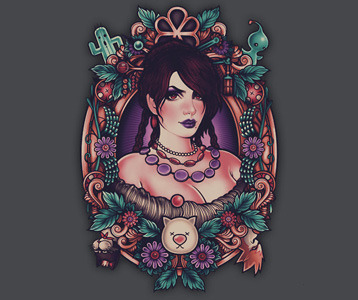 If you're a fan of Final Fantasy X or its sequel, Final Fantasy X-2, then you're more than familiar with the character on the front of this Lulu t-shirt. Acting as a guardian of the Summoner Yuna, Lulu uses black magic to protect the summoner. However, her black magic deviates from the norm, in that she is inspired by the traditional obeah voodoo priestess. She utilizes voodoo dolls, wears her hair in long braids and outfits herself in clothing reminiscent of a modern day witch. Promote the well-endowed guardian with this Final Fantasy X Lulu shirt. It won't necessarily help you to beat the game, but you'll look good playing it.