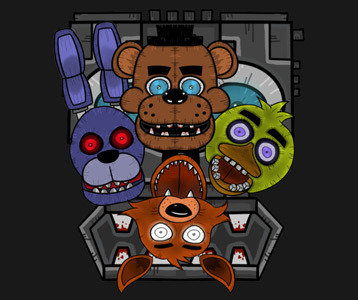 Wear this Freddy Fazbear's Pizza shirt as you work security at the number one destination for kids and parents alike to play games and eat pizza. Pictured on this Freddy Fazbear t-shirt are the animatronic robots that entertain the crowds. While Freddy and his robot pals are pleasant during the day, their demeanor changes drastically at night when the store closes. This Five Nights at Freddy's shirt will remind you to keep your eyes glued to the security camera feeds in order to survive even one night at Freddy's.