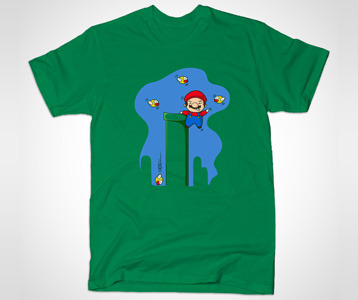 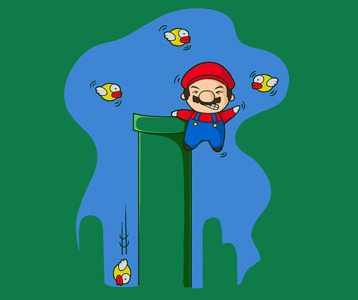 If you're amazed at all the fuss being made over Flappy Bird, the mobile game that took the world by storm in 2013 and early 2014, don't worry, you're not alone.  This Flappy Bird t-shirt features Mario defending his pipes. It's eluding to the games obvious inspiration from the Super Mario franchise, specifically with the pipes that Flappy must avoid.  The craze grew to a fever pitch in early February 2014 when the game's creator, Dong Nguyen, announced that he was taking down Flappy Bird from Apple's App Store and Google Play.  After the game was removed, desperation set in and several eBay merchants even began to sell the game preinstalled on mobile phones for up to $900.  So why did Nguyen take his game down?  He claims that it has become a problem due to its addictive nature.  His reasoning has left many puzzled, concluding that he must have faced legal issues, to which he denies, stating that it has "nothing to do with legal issues."  We're stumped too, considering most app creators would give anything to have a game that addictive.  This Flappy Bird Mario shirt is one of the most creative we've seen.  Wear it to let others know that you'll never forget Flappy.