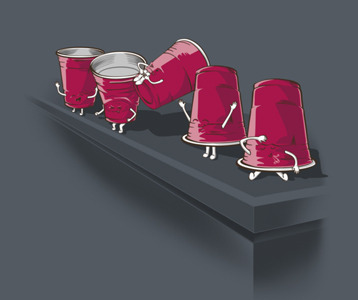 Drinking games are part of most college students’ experiences whether they try them once or go pro.  While images of beer pong are probably already popping up in your head, this tee features another popular drinking sport called flip cup.  This flip cup t-shirt takes a humorous tone with the quote, “Flip Cup and Pound Beer.”  If you are good at flip cup, this shirt might be for you.  If you are bad at this drinking game, you probably shouldn’t draw attention to your lack of flipping skills.

Flip Cup, often referred to as Cups, is a popular drinking game on college campuses that requires two teams with the same number of players to compete against each other.  Learning how to play flip cup is the easy part; the rules of the game are quite simple.  Players line up next to their teammates and across the table from their opponents.  When the game starts, the first player drinks the cup of beer in front of them, puts the cup down on the edge of the table and tries to flip the cup onto its top rim with one hand.  If it lands on its side, then they put it upright and try again until they do it.  When the player succeeds, the next player on their team drinks their beer and does the same thing.  This process is repeated until all players on the team have finished.  Whichever team has all members finished first, wins.

If this sounds like some of your fun filled college nights, then get this flip cup t-shirt and get flipping.  Mastering how to play the game efficiently won’t get you a letterman jacket, but it will give you some sweet bragging rights.