Have You Seen the Drunk Leprechaun? Flip Up t-shirt 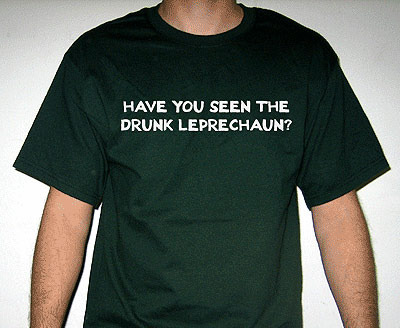 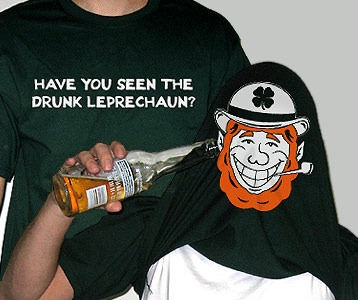 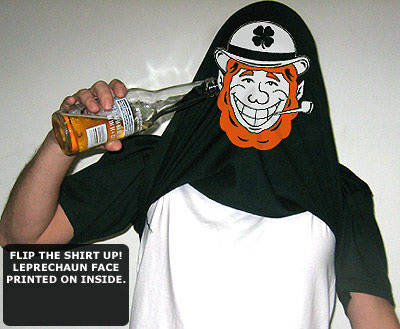 Many people like to dress up for St. Patrick’s Day.  Most people usually just wear green or adorn themselves with tons of plastic green shamrock shaped beads.  This flip up leprechaun shirt takes dressing up to a whole new level.  Not only do you get to be Irish for a day, you can look Irish too with this tee.  The front reads, “Have you seen the drunk leprechaun?”  When a fellow partier asks about it, you flip the bottom of the shirt up over your head and it reveals a smiling orange bearded leprechaun.  This is one of the most creative designs I’ve seen in a long time and I thought you might appreciate it too.

Leprechauns are a standard part of Irish folklore.  They are skilled at making shoes and are regularly caught playing practical jokes on people.  They are typically depicted as very short men with red beards who wear green clothes.  Although in the past, they were often said to wear red clothing.  Legend has it that every leprechaun has a pot of gold hidden in Ireland and that fairies have given them powers to protect their treasure.  If one is caught, then he can grant three wishes to his captor so that he is released or in some cases is able to just disappear.  You can track them down by following a rainbow to the end or listening for the hammering sounds of their shoemaking.

This flip up, turn into a leprechaun t-shirt is bound to put a smile on plenty of faces during St. Patrick’s Day celebrations, so snag one before the festivities begin!