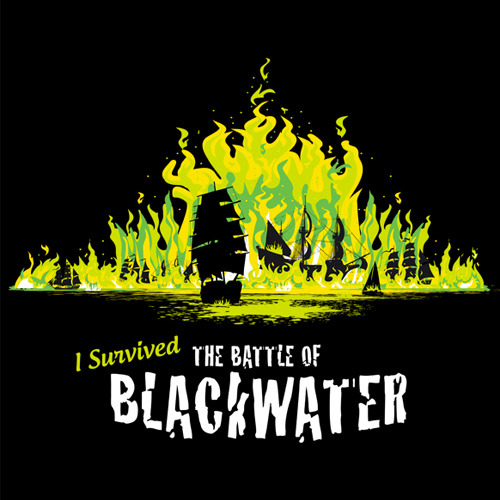 This Game of Thrones design pays homage to the ingenuity of Tyrion Lannister, the Hand of the King, as he carries out his plan to defend King’s Landing against the invading forces.  A key element of his plan includes luring the enemy ships into Blackwater Bay, close enough to destroy them with wildfire, a chemical that burns fluorescent green, melts the flesh off men and lays waste to most everything it touches.  This Battle of Blackwater Wildfire shirt displays the deadly chemical as it rains down on enemy ships in the background.  Tyrion tricks Stannis and the invading forces by sending out an empty ship into Blackwater Bay, then exploding the ship after it pours large amounts of wildfire into the water of the bay.  Wear the t-shirt to celebrate the climactic battle that lit up the night sky both in the George R. R. Martin book and on the HBO Game of Thrones show.