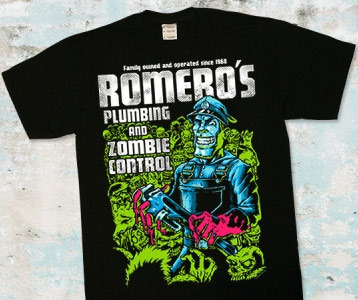 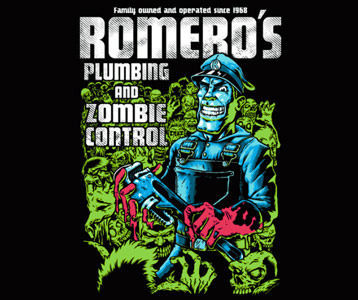 Yesterday, I learned of a special local screening of director George A. Romero’s cult masterpiece Night of the Living Dead.  The event is being held to raise money to save a small chapel at the Evans City Cemetery, which is one of the few remaining structures featured in the 1968 movie.  Unfortunately, a prior commitment prevented me from attending the screening today, but in honor of the event and the fact that today is the director's birthday, I decided to post this George Romero t-shirt that displays an imaginative design advertising Romero’s Plumbing and Zombie Control.

A few months ago, I had the chance to visit the Evans City Cemetery that is featured prominently in the opening scene of the classic black and white zombie movie.  We used still photos from the movie and watched video clips on our iPhones to pinpoint the exact filming locations at the cemetery.  After all, unlike the dilapidated chapel, the headstones haven’t deteriorated much in the 44 years since the filming.  It was a neat experience and making it even better is the fact that we only live 15 minutes from the cemetery, so we can return to the living dead location any time we want.  If your local cemetery wasn’t once plagued by zombies, get your fix with this George Romero shirt that features its own swarm of flesh eaters.

This t-shirt was discovered at TshirtBordello.