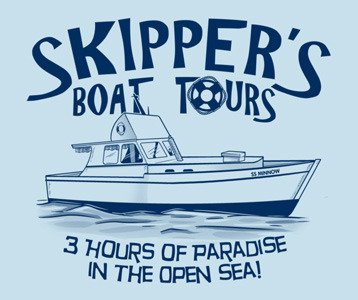 Just sit right back and you’ll hear a tale, a tale of a fateful trip…

The classic TV show Gilligan’s Island aired on CBS for three seasons from 1964 to 1967.  It chronicled the comic adventures of seven castaways who became shipwrecked on an island somewhere in the South Pacific Ocean.  “If it wasn’t for the courage of the fearless crew”, their ship, the S.S. Minnow, would have been lost at sea.  Instead, the charter boat ran aground on the shore of an uncharted desert isle, setting the stage for the hit situation comedy.  Well accepted during its initial run, the Gilligan’s Island TV show grew in popularity during decades of syndication, with reruns airing after school in the 1970s and ‘80s.  If you enjoyed the dimwitted antics of the goofy first mate Gilligan (affectionately referred to as “Little Buddy” by the “Skipper”), then this fun Gilligan’s Island t-shirt is the perfect piece of castaway clothing.  Wear it when your red Gilligan shirt from the show is in the wash.

In addition to the title character depicted on this Gilligan’s Island tee, six other castaways rounded out the cast, including the Skipper, Captain Jonas Grumby (Alan Hale, Jr.), and five passengers.  They included “The Millionaire” Thurston Howell III (Jim Backus) and his wife Eunice “Lovey” Wentworth Howell; “The Professor” Roy Hinkley (Russell Johnson); “The Movie Star” Ginger Grant (Tina Louise); and Mary Ann Summers (Dawn Wells).  Together, they had set sail from Honolulu for what was supposed to be a three hour tour, a three hour tour.  Their peaceful excursion took a turn for the worse after the weather started getting rough and the tiny ship was tossed.  Eventually, they found themselves stranded with no idea where they were, except for the fact that they could pick up Hawaiian AM radio transmissions on their portable receiver.

This red Gilligan’s Island shirt is the perfect tribute to the TV show.  With it on, you’ll find yourself humming or even singing aloud the memorable Gilligan’s Island theme song, “The Ballad of Gilligan’s Isle”, which was composed so that first time viewers would easily understand the premise of the show.  Wear your Gilligan t-shirt as you watch each episode in hopes that the castaways make it off the island.  Then again, that would mean no more laughs...