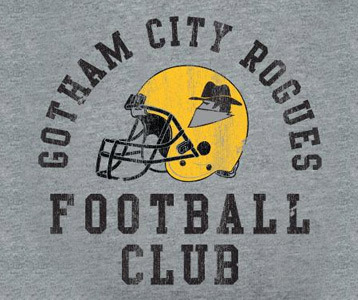 In early 2011, we were excited to hear that director Christopher Nolan would be filming much of The Dark Knight Rises in our then hometown of Pittsburgh.  Casting calls went out, one of which was a request for extras to fill the seats of Heinz Field, the home of the Pittsburgh Steelers.  This Gotham City Rogues t-shirt represents the make believe football team that calls the stadium home in the movie.  The team even wears the Steelers’ colors of black and gold.

Filming at the stadium took place on Saturday, August 6th, with several Steelers players, including Hines Ward and Ben Roethlisberger, appearing as Gotham Rogues.  Former Steelers coach Bill Cowher even returned to portray the Rogues head coach and Pittsburgh Mayor Luke Ravenstahl, who never misses a chance to indulge in the perks of his job, stepped in to play the kicker of the rival fictional team, the Rapid City Monuments.  Show your support for the team that Batman roots for with this Gotham Rogues shirt that is perfect for both fans of the movie and the city where it was filmed.  Go black and gold!