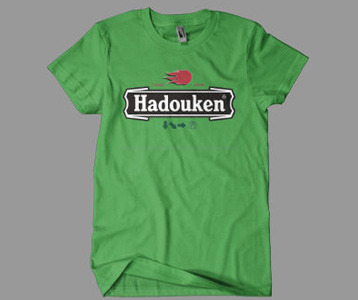 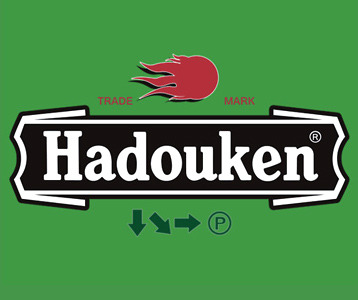 If you’ve ever played any of the numerous editions of the Capcom Street Fighter video game, then you’re most likely familiar with the special attack known as the Hadouken, whereby a character thrusts his or her palms forward, releasing a surge of spirit energy at an opponent.  This Street Fighter Hadouken t-shirt incorporates the move into the familiar Heineken beer label.  The button guide even appears at the bottom of the design in case you forget how to perform the attack.  Although it is most often associated with the main protagonist of the video game series, Ryu, who shouts, “Hadouken!” as he unleashes the ball of energy, the movie is also used by other characters, including his best friend Ken Masters.  Perfect for adult fans of the Street Fighter video game, this Hadouken Heineken shirt is a fun tribute to the familiar attack.