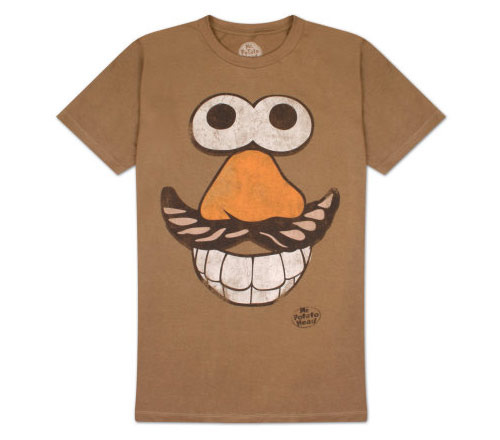 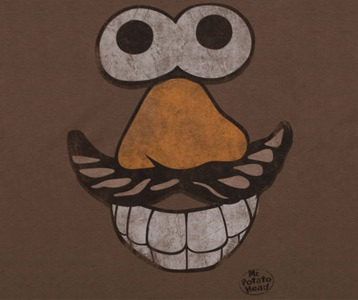 The Toy Story 3 trailers have been released and are running rampant on TV.  I’m excited to watch the film in June to see the new toys, but I suspect my favorite will continue to be Mr. Potato Head (voice of Don Rickles).  If this toy or character reminds you of the good ol’ days, then snag this Mr. Potato Head t-shirt today.  This tee could have you looking like a long lost Potato Head member in no time.

Mr. Potato Head is a well known toy that was released in 1952.  It did not start out as what you picture today but rather began as a collection of parts that could be attached to a potato or other vegetable.  Along with the help of a television commercial (the first toy commercial ever), sales boomed and more products were created.  In the following year, a Mrs. Potato Head collection was added along with Sister Yam and Brother Spud collections.  It wasn’t until 1964 that Hasbro began adding the plastic potato body that we are familiar with today.  He and the missus now come in a variety of theme packages like sports players, movie characters and holiday icons.

Whether you prefer Darth Tater, Trick or Tater, or Tubby Tater, this Hasbro Mr. Potato Head shirt is sure to fit your style.  After all, they are all the same base, just different accessories.  Have a tateriffic day!

This t-shirt was discovered at Stylin Online.