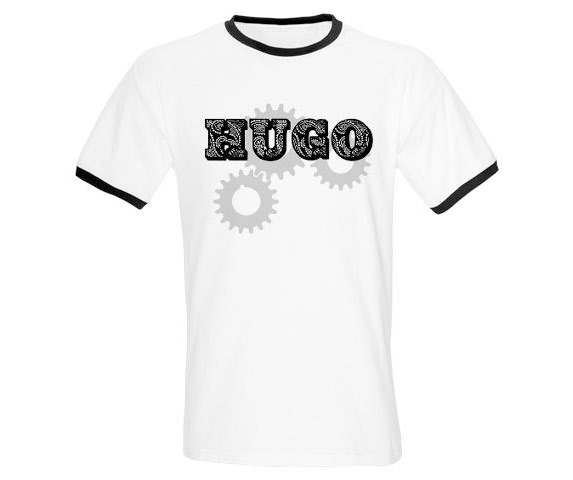 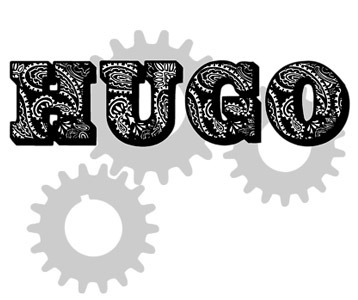 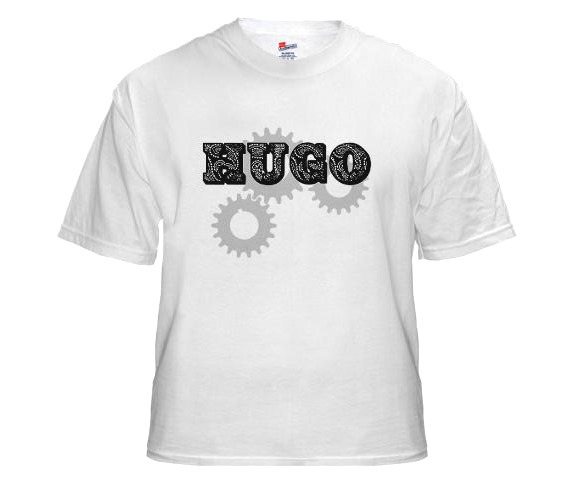 When the 3D movie Hugo lands in theaters at the start of the 2011 holiday season, it may very likely be hailed as a crowning, Oscar-worthy cinematic achievement.  After all, with the respected and accomplished director Martin Scorsese at the helm, don’t be surprised if critics see the movie’s use of 3D as an integral part of the story, instead of the shameless ticket-selling gimmick that it has in part become.  To fully realize why Scorsese took on the challenge of shooting Hugo in 3D, we must open the pages of the 2007 novel on which the movie is based, author Brian Selznick’s The Invention of Hugo Cabret.  This t-shirt represents the movie and the story through the use of words and illustration, much in the same way as the book tells it.

As author Brian Selznick has stated, his book is not exactly a novel, nor is it a graphic novel, picture book, flip book or movie.  It is in many ways an amalgamation of all of these mediums, and what is most impressive is Selznick’s ability to blend the visual telling of his story with the written word.  Of course, there is more to it than just being a good writer and a skilled illustrator.  One must have the vision to bring these two mediums together in a way that makes readers thirsty for each of the book’s 550 pages.  In a similar manner, to help compensate for what is lost in translating Selznick’s story to the screen, director Scorsese has turned to 3D as a way to bring an added visual element to the movie.  Whether it works or not will ultimately be up to the ticket buyers (not the critics).

Celebrated here by this Hugo t-shirt, Selznick’s story tells the tale of a twelve-year-old boy named Hugo Cabret, an orphan who lives in secret in the walls of a Paris train station.  Prior to his father’s death, the two were attempting to fix an automaton that his father had found in the museum where he worked.  Possessing a notebook that his father used to map out the mechanical doll’s inner workings, Hugo embarks on a mysterious and thrilling adventure to bring the doll to life.  Along the way, he meets a strange girl named Isabelle (Chloe Grace Moretz) and a bitter old toy store salesman named Georges Melies (Ben Kingsley).  Both possess keys to unlocking the automaton’s secrets, Isabelle literally and George through his past.

As you can see by the posting of this Hugo movie t-shirt, I still have hope for 3D.  In the right hands and with the right story, it has the ability to bring a film to life, just like the missing key does for the automaton in Selznick’s story.