Hunger Games Big Bird T-Shirt – I Am the Muppetjay 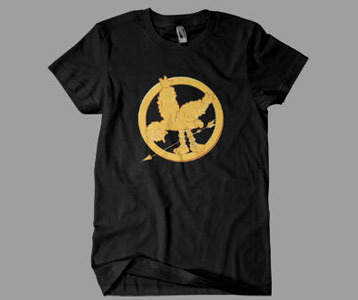 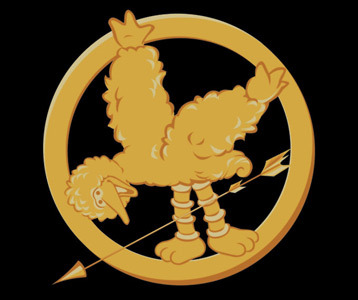 As fans will immediately recognize, the design on this funny Hunger Games I Am the Muppetjay t-shirt is based on the gold Hunger Games mockingjay pin worn by Katniss as a symbol of rebellion toward the Capitol.  The mockingjay itself was produced by the unintended mating of mutant jabberjays and mockingbirds, which was a strike against the Capitol’s own ingenuity.  The Capitol had originally created jabberjays, who could retain and later repeat lengthy human conversations, as a way to eavesdrop on the rebels during the Dark Days.  The only problem was that the rebels caught on and used the jabberjay’s unique ability to provide the Capitol with false information; thus resulting in the Capitol’s decision to let the rest of the jabberjays, which were all male, die off.  Instead, the birds began mating with female mockingbirds, which created a new species that has come to be known across the districts as mockingjays.  This Hunger Games Big Bird shirt displays the familiar pin from the story and movie, only here it features the Sesame Street star Big Bird offering his best impression of the mockingjay from Katniss’ pin.