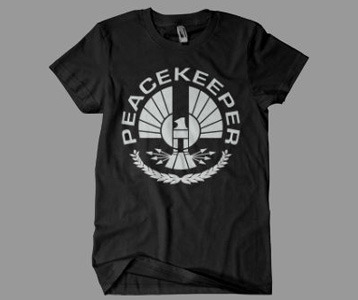 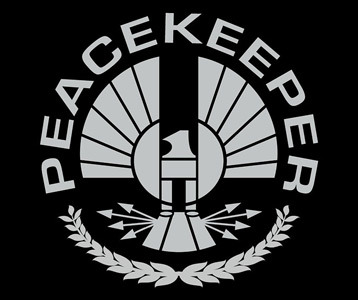 As one of Panem’s Peacekeepers, your duty is to maintain order in the district to which you are assigned by the Capitol.  Familiar Peackeepers from the Hunger Games books mainly work in District 12, including Darius, the youngest Peacekeeper; head keeper Romulus Thread; the former head keeper Cray; and the female Purina, who helped reduce the extent of Gale’s lashings for presenting a poached turkey to Romulus.  This Peacekeepers shirt displays some of the familiar elements related to these individuals, who also serve as soldiers in the Capitol’s army.

Peacekeepers are often recruited from the Capitol or District 2 where most of them are trained.  Acting as Panem’s police force, they also administer punishments which vary in severity across the districts.  They can be ordinary citizens who are recruited to serve by the Capitol.  This is often the case with those who hail from District 2.  The Hunger Games Peacekeeper t-shirt features an emblem for this group of lawmen (and women), some of whom can’t help but sympathize with the plight of the suffering Panem citizens.