Tiger Woods I'd Tap That t-shirt 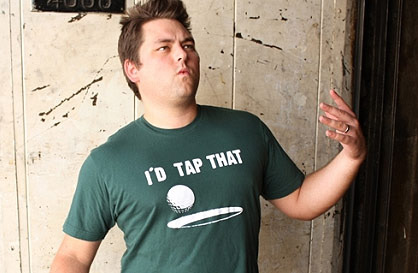 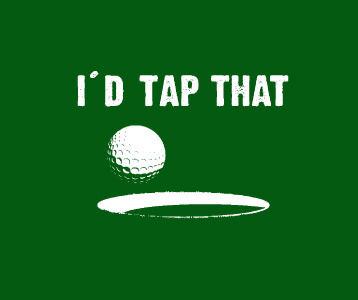 The much anticipated apology from Tiger Woods was aired today.  After seeing his speech plastered all over the news and internet, I noticed that it was received with mixed reviews.  Some people think he seems to really regret his actions and some thought he was just a good actor.  What do you think?  Personally, I don’t see a changed man at all.  He seemed to be doing it basically to just help him clear his name, but I can’t blame him.  Tiger went from golfing golden child to cheating scumbag overnight, resulting in the loss of fans, endorsement deals and cold hard cash.  Either way, this I’d Tap That t-shirt with a golf theme reminded me of Tiger’s current predicament.  I hope you find the tee amusing, even if his situation isn’t.

Simply put, Tiger Woods is considered by most to be the best golfer of all time.  He began at the age of two and was soon recognized to be a golf prodigy.  This paired with his bright smile won fans over immediately, transforming golf into more of a mainstream sport.  In December 2009, Tiger’s career and personal life came crumbling down when more than a dozen women came forward and admitted to sleeping with him.  His good guy image was irreparably damaged since he was already married to a beautiful Swedish blond named Elin Nordegren, with whom he has two children.

Whether you like golf or are just looking for a funny tee, this I’d Tap That t-shirt should have you covered.  As for me, I hope Tiger will go back to only tapping golf balls…if you know what I mean.