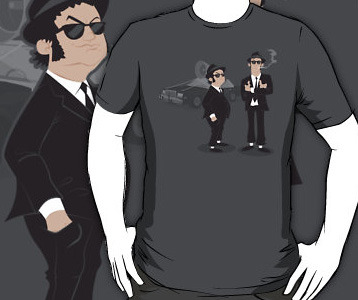 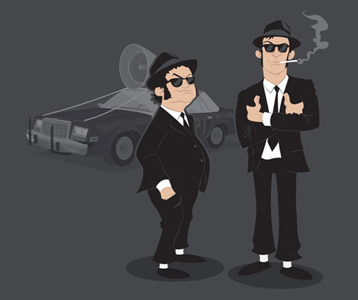 The Blues Brothers got their start as part of a musical sketch on the TV show Saturday Night Live in the spring of 1978.  Comedy actors John Belushi and Dan Aykroyd played the parts of brothers and band members Jake Blues (lead vocalist) and Elwood Blues (harmonica/backup vocals).  The success of their Saturday Night Live appearances led to the release of the album Briefcase Full of Blues in 1978.  It also sparked the 1980 movie The Blues Brothers, which is what people are most familiar with.  This Jake & Elwood shirt displays well-executed cartoon style versions of the characters along with their car from the movie, which is displayed in the background.