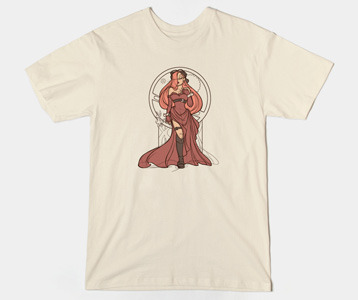 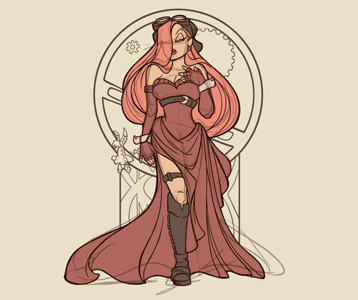 If you were a kid in the 1980s, you probably remember seeing director Robert Zemeckis’ movie Who Framed Roger Rabbit, and if you were a boy, you undoubtedly remember the sultry character Jessica Rabbit, Roger’s wife.  What impressed me most about the movie at the time, aside from the animated femme fatale, is the movie’s blend of animation and live action.  This Jessica Rabbit t-shirt features the movie’s most popular animated character, whose accolades include being named the sexiest cartoon character of all time and Disney’s Jessica Rabbit Store that used to be part of Pleasure Island, which sold merchandise related to the busty character.  Jessica is mostly based on the character Red from Tex Avery’s famous 1943 cartoon short Red Hot Riding Hood.  She was also inspired by sizzling screen sensations like Lauren Bacall, Rita Hayworth and Veronica Lake, the latter for her peek-a-boo hairstyle.  This Jessica Rabbit shirt offers a steampunk twist that gives the character a welcomed degree of toughness, while still maintaining her alluring attributes.