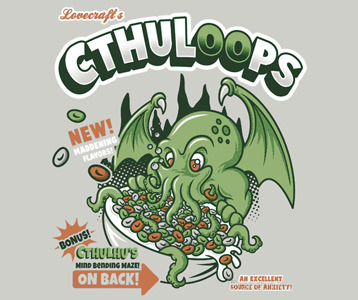 What do cereal-loving H.P. Lovecraft fans and toucans have in common? No, it’s not that they both squawk a lot when they're hungry…it is that both of them can sniff out a vibrant colored sugar-coated cereal from a mile away!  This Cthulhu Froot Loops shirt is designed for anyone who would jump through hoops for a great science fiction story or a nice big bowl of the loops!

Fruit Loops cereal (as it is alternatively spelled) is made by Kellogg’s and has been enjoyed by children and adults since 1963.  The well-known breakfast treat represented in this Cthuloops t-shirt design began with three flavors that included orange (orange), lemon (yellow) and cherry (red), which were highly advertised in commercials.  Along with the help of mascot Toucan Sam, who is known for the tagline, "Follow my nose.  It always knows," the mix has grown in popularity over the years.  The cereal recipe remained unchanged all the way through until the early nineties when Cthulhu green (lime) was added to the mix in 1991.  A couple years later in 1994, berry (purple) joined in on the fun followed by blueberry (blue) in 1997.  The nineties also brought another welcomed addition, three little toucans, Sam’s nephews Louis and Puey, and his niece Susey.

You might be among the followers who didn’t realize that each different colored piece of cereal that was the inspiration for this Cthulhu Fruit Loops t-shirt actually has a separate distinct flavor.  Don’t worry; a lot of people aren’t aware of this interesting fact.  Let’s be honest, they all taste like sweet goodness no matter the color or the flavor.  Enjoy your Froot Loops Cthuloops shirt while feasting on your favorite brekky.  Tee with your cereal anyone?