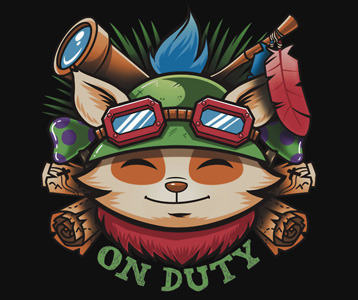 If you're a fan of the multiplayer online battle arena (MOBA) video game known as League of Legends, then you'll more than likely recognize the yordle Teemo on this shirt. Teemo is a brave yordle who fires blow darts at his enemies as he fights to defend Bandle City, his home. He has the ability to go stealth by standing still for two seconds, after which you will notice that his attack speed has momentarily increased. Support the little captain with this Teemo t-shirt that will remind other League of Legends fans that Teemo is on duty!