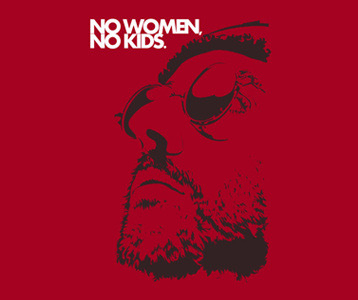 There are many aspects to director Luc Besson’s The Professional (also know as Leon) that leave a lasting impression on the audience.  I can remember first seeing the movie on video in early 1995, several months after its theatrical release.  The movie tells the story of a troubled twelve-year-old girl named Mathilda (Natalie Portman in her film debut), whose parents and four-year-old brother are murdered by corrupt DEA agents led by the drug-crazed Norman Stansfield (Gary Oldman).  Mathilda, who was out shopping at the time, seeks refuge in a neighbor’s apartment when she returns home, a hitman (he refers to himself as a “cleaner”) named Leone “Leon” Montana (Jean Reno).

This The Professional Leon t-shirt displays the hitman who becomes Mathilda’s protector and who teaches her some of the skills of his trade, as she vows to seek revenge on Stansfield and the other corrupt DEA agents who took the life of her little brother.  If the movie doesn’t leave a lasting impression after seeing the twelve-year-old Mathilda smoking a cigarette or learning how to target people with a scoped rifle, The Professional’s explosive conclusion is one that you won’t quickly forget.  Wear this Leon Movie shirt to spread the word about this gritty, yet kindhearted, action-packed thriller.