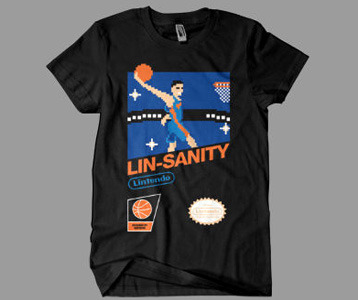 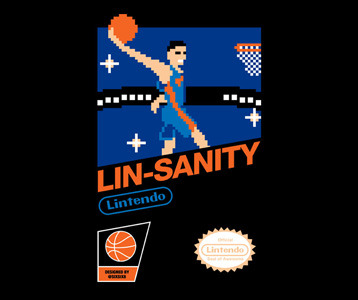 After being picked up on waivers by the New York Knicks, Jeremy Lin has taken the NBA by storm, prompting outspoken Laker Metta World Peace (Ron Artest), who was watching him on TV, to run past reporters screaming, “Lin-sanity!”  The quote provided part of the inspiration for this Super Lintendo Lin-Sanity shirt.  The rest of the inspiration came from a comment that Jeremy made during an interview, stating that he grew up playing lots of Super Nintendo, prompting fans to dub him Super Lintendo.  This Linsanity t-shirt is a tribute to the NBA’s newest sensation and his love for the SNES.  His comment has mistakenly given some fans the impression that playing lots of Super Nintendo will get you to the NBA.  If that were true, then that kid from the movie The Wizard would theoretically be an NBA All-Star by now and a few of my friends would have at least made it to the D-League.  No, Jeremy Lin’s rise to stardom came from endless hours of practicing and playing basketball growing up.  His father taught him and his brothers how to play at the local YMCA and his mother helped create a National Junior Basketball program in his area.  If you’re like Jeremy and have a love for both basketball and video games, particularly the SNES, then this Lin-Sanity t-shirt makes perfect sense.