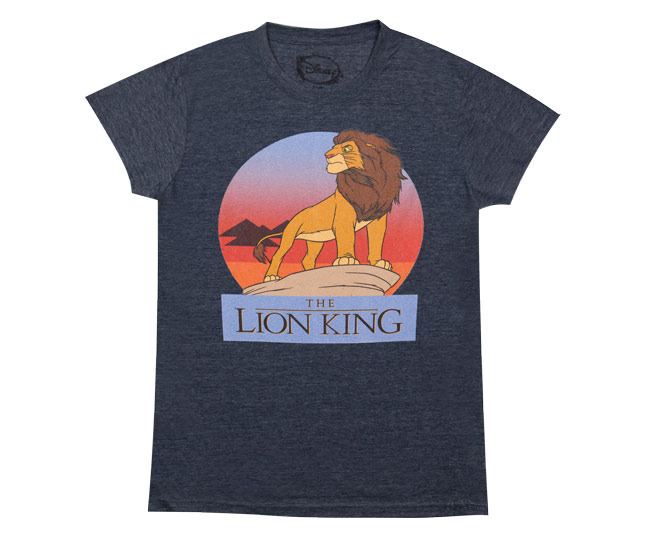 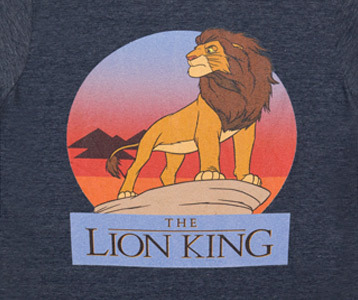 My friend and her husband just got back from Vegas where they went to celebrate their fifth wedding anniversary.  I love that they had fun and I love even more getting to hear about their adventures.  This Lion King t-shirt represents the part of their trip that I was the most interested in.  They went to see the Disney show while they were there, which I find particularly adorable because they went to Disney World on their honeymoon.  Whether the tie-in was intentional or not, it reminded me of the great family film on which the live show is based.  Hakuna matata!

Disney’s The Lion King movie, embodied here by this t-shirt, was released in June of 1994.  It follows a young lion cub named Simba as he grows up in the African safari.  He is the prince of the land, but he runs away after his father Mufasa is killed by his brother Scar.  Scar takes over the territory with the aid of his evil hyenas.  When Simba leaves he meets a couple of friends, including a warthog named Pumbaa and a meerkat named Timon, who teach him about Hakuna Matata; how to live with no worries.  Simba runs into his past again when he rescues his buddies from the jaws of his former playmate, Nala.  Nala tries to coax him into coming back but fails.

Eventually, Simba takes his place as the leader of the pride and has his own new cub to carry on the tradition.  This Lion King shirt features Simba after he realizes his place as king, standing on the Pride Rock.  If you remember this scene as vividly as the first time you saw it then get your tee today.