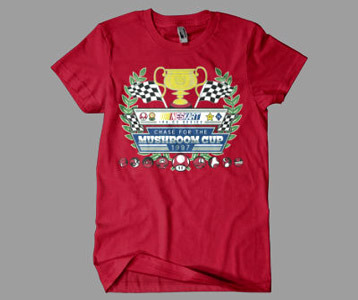 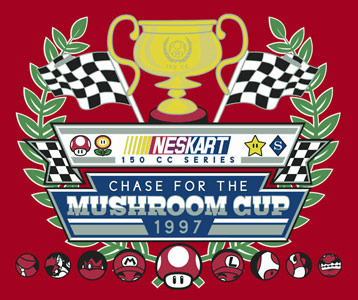 If you’ve owned a Nintendo gaming console at some point in your life, then you are most likely familiar with the video game series that is featured on this Mario Kart t-shirt.  The multiplayer racing game involves players selecting and controlling a character from the Mario video game franchise to compete in trial races or for a chance to win the Mushroom Cup.  Holding the title of being the first console based go-kart racing game, the series has experienced both critical and commercial success, leaving behind a legacy of great games with the promise of more to come.  If you often wish that you could fire Koopa shells, drop banana peels and use mushrooms for speed boosts when you’re driving in the real world, then this Mario Kart shirt is a reminder of the next best thing.  Wear it for fun or give away a Mushroom Cup tee as a reward to the winner of your own Mario Kart tournament.