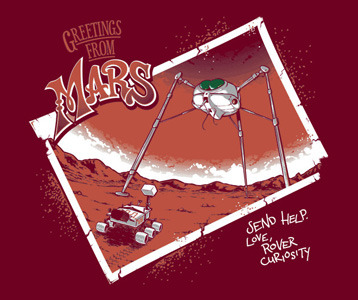 Commemorate the landmark moment in space exploration with this NASA Curiosity Rover t-shirt.  The design on the front displays a humorous postcard style image of the rover on Mars.  The very first images beamed back to Earth were taken through a “fisheye” wide-angle lens attached to one of the rover’s Hazard-Avoidance cameras located at the base of the machine.  Black and white photos depicted a shadow of the rover itself on the Martian gravel.  The lens’ dust cover had yet to be removed and a significant amount of dust could be seen on the lens and in the air, still settling after the landing.  This Mars Curiosity Rover shirt celebrates the heaviest piece of machinery that NASA has ever landed on the Red Planet.  The six-wheeled nuclear powered explorer is the size of a small compact car, and it will spend the next two years looking for evidence that Mars could have once contained the ingredients for life.