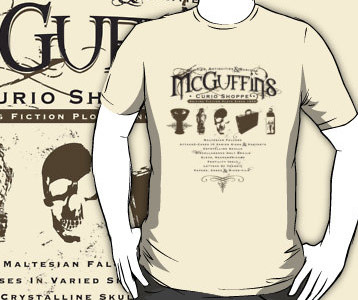 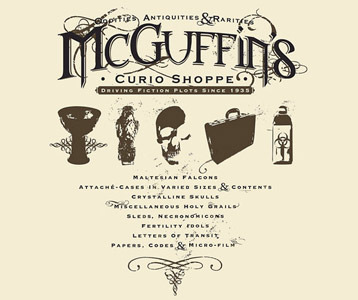 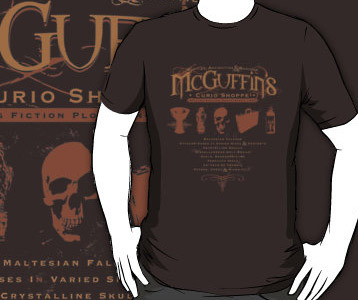 What is a MacGuffin?  A McGuffin (sometimes spelled MacGuffin) is a plot element in filmmaking, or any other form of storytelling, that grabs the viewer’s attention and further drives the plot of the story.  In many cases, this plot device is highly sought after in the first half of the story, but it becomes relatively meaningless or forgotten by the story’s end.  This McGuffin t-shirt features an imaginative design for a curio shop that sells famous film MacGuffins, including Maltese Falcons, attaché cases, crystal skulls, holy grails, sleds, micro-film and other items.

Director Alfred Hitchcock popularized the term in relation to filmmaking, starting with his 1935 film The 39 Steps, in which the character of Hannay (Robert Donat) is motivated throughout the film to learn what “the 39 steps” are.  In various interviews, Alfred Hitchcock answered the question, “What is a MacGuffin?” by using an example of two men on a train.  One man asks the other about his mysterious package.  “Oh, that’s a McGuffin,” the man who owns the package responds.  The man then asks what exactly is a McGuffin.  The owner of the package tells the man that it is “an apparatus for trapping lions in the Scottish Highlands,” to which the man responds, “there are no lions in the Scottish Highlands.”  The owner replies back, “Well, then that’s no MacGuffin.”  This example underscores the point that often times a McGuffin is nothing at all, but like in this example used by Hitchcock, it moves the story along.  Allow this MacGuffin shirt to further the plot of your own life story, while at the same time rousing the curiosity of those around you.