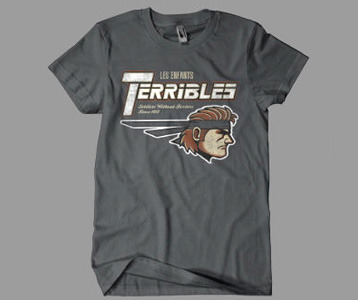 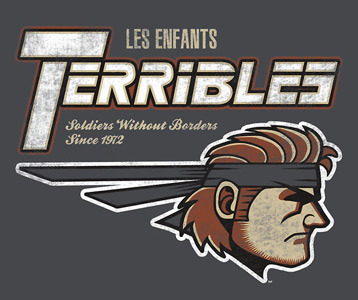 If you’re familiar with the Metal Gear video game franchise, then you are also aware of the United States Government’s project Les Enfants Terribles (The Terrible Children), which was created in 1972 in order to produce genetic clones of the near perfect soldier Big Boss.  The clones were to also act as an insurance policy in case Big Boss became the enemy of the Patriots organization, which sponsored the Les Enfants Terribles project.  This Metal Gear t-shirt displays the genetic clone Solid Snake, the video game’s hero who is the twin brother of the genetically superior Liquid Snake.  Liquid refers to Solid as the “Brother of Light” and himself as the “Brother of Dark”, alluding to the evil that festers inside of him out of his resentment for his brother, who he mistakenly believes is the genetically superior twin.  This Metal Gear Solid shirt displays the name of the project that produced the two brothers, Les Enfants Terribles.  The project's title was inspired by the 1950s movie and the novel of the same name.