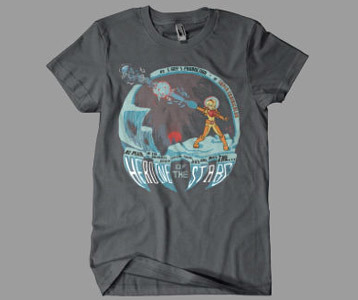 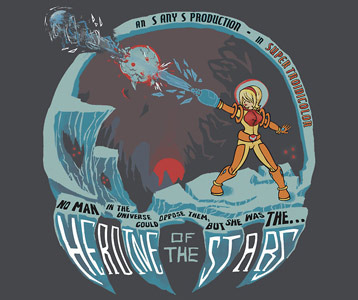 Released in 1986 by Nintendo, Metroid is one of the first video game’s to feature a female heroine.  Samus Aran is an ex-Galactic Federation soldier turned bounty hunter, who was raised by the extraterrestrial avianoid race known as the Chozo race.  They trained her to be a warrior and injected her with their blood to make her stronger, in addition to giving her the Power Suit.  This Metroid Prime t-shirt displays a retro 1950s style image of Samus Aran wearing the armored suit that also features a cannon in place of one of the arms.  The cannon fires super-powerful blasts and a set number of missiles and various beams.  She uses them to battle the Space Pirates and their leader, Ridley, who attempt to harness the power of the Metroids in an effort to destroy Samus and anyone else who opposes them.  Metroids are jellyfish-like aliens that suck the life energy from their victims, thus turning the creatures into energy rich beings.  If you wish that you could transform into a Morph Ball and roll through tight spaces like Samus Aran, this Metroid shirt will help get you one step closer.  It features a design based on 1950s B movie posters.

This Metroid t-shirt was discovered at TeePublic.