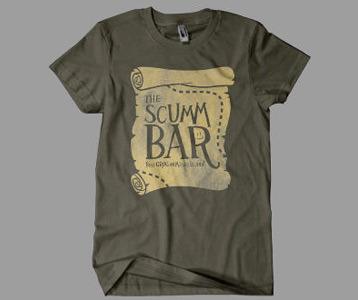 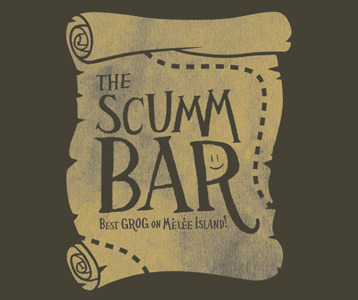 In 1990, LucasArts introduced the pirate adventure game The Secret of Monkey Island.  This Scumm Bar shirt promotes the fictional establishment in the game, which is located on Melee Island, the capital of the Tri-Island Area.  While the game’s main character, the hapless pirate Guybrush Threepwood, is visiting the bar, he sometimes orders a glass of grog, which is an alcoholic drink that is comprised of rum, water, lime and sugar.  This Monkey Island shirt reminds us that the Scumm Bar has the “Best Grog on Melee Island!”

On an interesting side-note, the name of the bar is actually based on a scripting language created by LucasArts developers that is a cross between a game engine and a programming language.  SCUMM (Script Creation Utility for Maniac Mansion) was used to develop a number of games, including several in the Monkey Island series.  The bar’s name becomes Lua bar in the fourth installment of the series released in 2000, a nod to the LucasArts programming language that replaced the SCUMM engine.