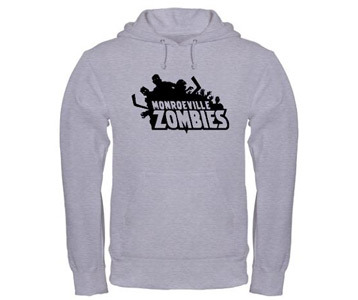 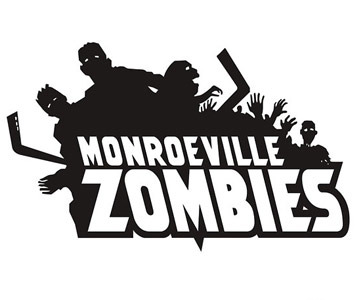 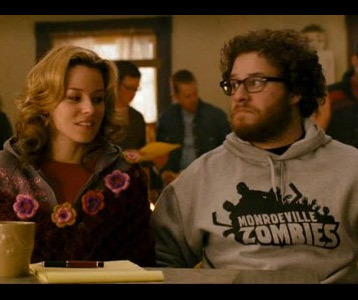 I grew up on the border of Monroeville, Pa, a suburb just outside of Pittsburgh and the setting for the Kevin Smith movie Zack and Miri Make a Porno.  I’ve been to Monroeville Mall hundreds of times over the years, whether it was hanging out at the old Tilt arcade, or working part-time during high school at the small 4-screen movie theater that used to annex the mall (now a Best Buy).  It was exciting to see some of my old stomping grounds onscreen in the Kevin Smith film, which tells the story of Zack Brown (Seth Rogen) and Miri Linky (Elizabeth Banks), roommates who come up with the idea of making a pornographic film together in order to pay their utility bills.  This Monroeville Zombies hoodie or tee features the logo for Zack’s amateur community hockey team, which can also be seen on his Monroeville Zombies hockey jersey in the movie.

The inspiration for Zack’s hockey team’s jersey logo comes from the fact that Monroeville Mall was also the setting for the 1978 George A. Romero zombie movie Dawn of the Dead, on which special effects artist Tom Savini, who has a cameo in Smith’s movie, also worked.  Of the location, Kevin Smith has commented, “It’s as close to a zombie movie as I’ll ever get.”  If you’re a hockey fan, a horror buff or you just enjoy Kevin Smith’s Zack and Miri movie, this Monroeville Zombies shirt is a cool way to express your devotion.

This t-shirt was discovered at FiveFingerTees.