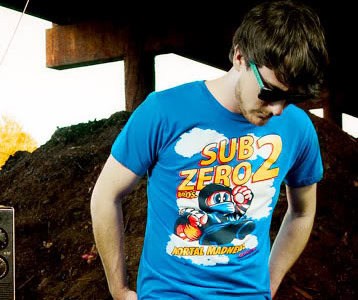 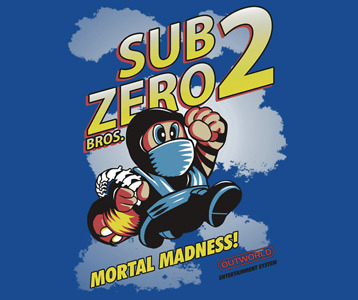 If you were a gamer during the 1990s, you're undoubtedly familiar with the ultra-violent fighting game Mortal Kombat.  The video game and its memorable characters first unleashed their vengeance on arcades in 1992.  This Sub-Zero t-shirt celebrates one of the game's most memorable characters, who also goes by the name Kuai Liang.  With the ability to generate and control the powers of ice, Sub-Zero can freeze his opponents before having his way with them.  He has a variety of finishing moves, more commonly referred to as "fatalities."  In this Super Mario Bros. mash-up, he has finished off his opponent by grabbing the neck and ripping out the spine and skull, which is known as a Spine Rip.  If you're a fan of this Cryomancer who is a member of the Lin Kuei clan, then this Mortal Kombat Super Mario Sub-Zero Bros shirt will make you want to battle again just like in the good old days, aka the 1990s.