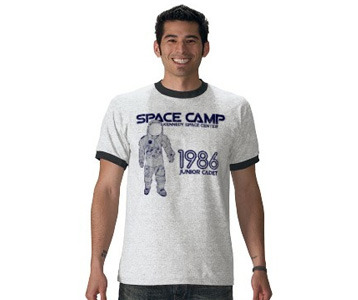 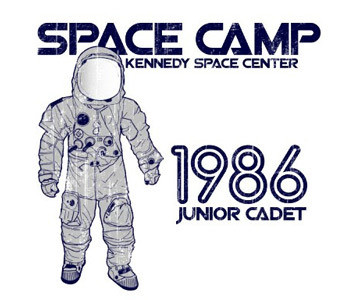 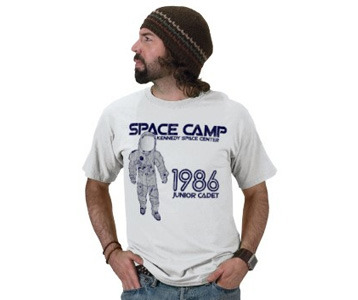 With NASA’s recent discovery of water ice on the moon following the intentional crash of its Lunar Crater Observation and Sensing Satellite, or LCROSS, we found it fitting to post this retro NASA Space Camp t-shirt.  The front of this NASA tee displays a retro image of the shuttle, celebrating the nearly fifty-two years that the National Aeronautics and Space Administration has been in existence.  The Space Shuttle spacecraft itself has been in use since 1981, with the first manned flights beginning in 1982.  In order to help get kids more interested in science and the space program, the U.S. Space & Rocket Center in Huntsville, Alabama founded Space Camp in that same year.

The idea for Space Camp stemmed from a discussion between German-American rocket physicist Dr. Wernher von Braun and Edward O. Buckbee, who were touring the U.S. Space & Rocket Center in 1977.  When Dr. von Braun noticed children admiring the rockets and taking notes, he commented, “We have band camp, football, cheerleading; why don’t we have a science camp?”  The idea blossomed into the U.S. Space Camp program, which opened its doors in 1982.

Attendees to the facility can either choose an actual camp experience or participate in day camp educational programs.  The learning opportunities include space oriented camp programs, aircraft themed Aviation Challenge programs, and outdoor X-Camp programs, all designed to promote science, engineering, aviation and exploration.  The individual experience depends on the attendee’s age, with children between 9 and 11 years old attending Space Camp, 12-14 year olds attending Space Academy, and young adults between 15 and 18 participating in Advanced Space Academy.

Whether you’ve stayed overnight in the Habitat facilities at Space Camp, or you’re just a huge fan of space exploration, this retro NASA Space Camp t-shirt is the perfect way to convey your support for the men and women who are constantly expanding the boundaries of this frontier.  Maybe someday you’ll be able to explore that horizon as well.  For now, this Space Camp tee will have to suffice.