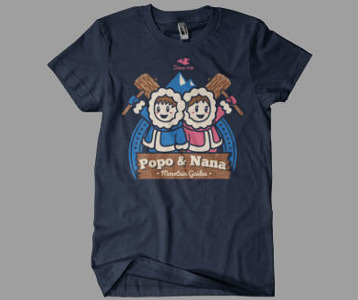 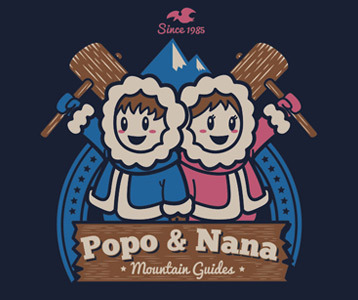 Ah the good old days, or should I say good "cold" days.  The video game Ice Climber was released in 1985 for the Nintendo Entertainment System.  If you recall, the game involves two Eskimos who must climb up 32 ice-covered mountains to recover vegetables that were stolen by a giant condor.  This Ice Climber Popo and Nana t-shirt features our two heroes, complete with their wooden mallets and blue and pink Eskimo parkas.  Popo and Nana use the mallets to break ice blocks and whack enemies such as Topies (Yetis), Nitpickers (a mountain-dwelling bird) and Polar Bears.  If you miss the 8-bit ice breaking action, then this Ice Climber shirt will help you to relive the fun.  Of course, you could just melt the prehistoric ice that has been surrounding your NES and take another trip up the mountain.