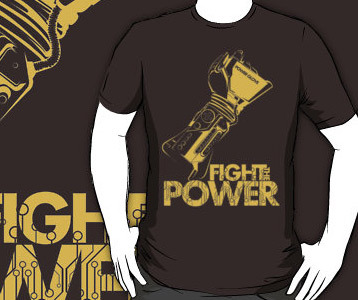 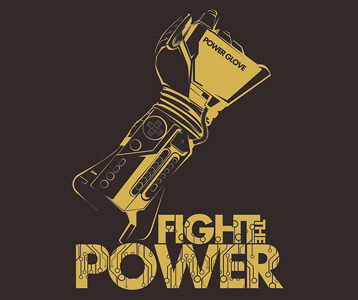 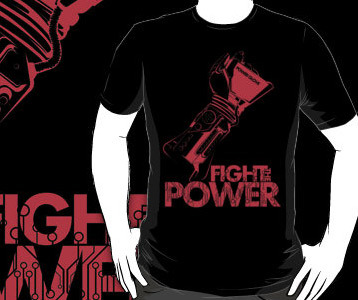 Long before the Nintendo Wii ushered in a new era of gaming with its motion sensitive Wiimote controllers, which allow players to interact with games by moving their hands to manipulate characters and items on the screen, Nintendo unveiled a glove style controller that attempted to do the same thing.  The year was 1989 and the controller was the much hyped Power Glove.  For most of us, the closest we ever got to the controller was seeing it in the 1989 Fred Savage movie The Wizard, in which the arrogant antagonist Lucas shows off his skills at the game Rad Racer using the glove.  When he’s done, he turns around and delivers the movie’s most memorable quote, “I love the Power Glove.  It’s so bad.”  Sharing a similar theme, this Power Glove t-shirt displays an image of the controller with the humorous phrase, “fight the power” displayed underneath.  In reality, the infamous glove wasn’t exactly “so bad”.

Although it was an officially licensed Nintendo item, the company did not have a hand in its design or its release.  Despite its impressive looks, the controller was imprecise and hard to use.  Only two Power Glove specific games were made, Super Glove Ball and Bad Street Brawler, both of which were playable with the normal NES controllers as well, despite not being able to utilize the full repertoire of moves.  In the end, it was a commercial and critical flop, but its failed potential lived on in the minds of gamers, game designers and the Nintendo Corporation.  This Nintendo Power Glove shirt is a tribute to its own unrealized potential.  However, more than a decade later, Nintendo began research on what is now the Wiimote, which is part of one of the best selling consoles in video game history, the Nintendo Wii.  Celebrate its roots with this nostalgic Nintendo tee.